During the reenactment event ‘Walcheren Expedition 1809’, there are extra activities for the ‘Regency civilian guests’ who travel down especially for this event. There is time to watch the battle and activities around it during the weekend.

7 – 12 pm – Mayor Schorer Ball in the Townhall of Middelburg

10 am – Memorial church service in the Little or Scottish Church, Veere 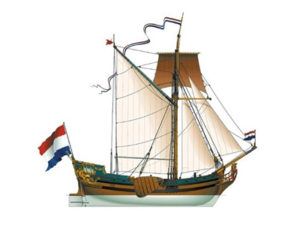 On the Friday afternoon there is the opportunity to go on a 2,5 hr sailing trip around lake Veere on the Utrechts Statenjacht. This Tall Ship is a reconstruction of a 1746 ‘Statenjacht’.

After the Sail we are most welcome at restaurant ‘De Peperboom’ for our dinner.

5 pm – Dinner in Restaurant de Peperboom in the Kapellestraat 11, 4351 AL Veere
De Peperboom is named after the ‘Fluyt Ship’ de Peperboom. This ship sailed for the Chamber of Zeeland of the Dutch East India Company. The skipper of the Peperboom used to live in Veere. He was known as a skilled sailor and hospitable man. The menu, to choose from, will follow closer to the time. Depending on the season products €25.- / €35.- to be paid at the restaurant.

Just around the corner we will be able to practise Regency dancing.

7-9.30 pm – Danceworkshop at ‘de Korenmaat’, Kerkstraat 6, 4351 AK Veere €16.-
Dance master Lieven Baert will teach us the dances we will dance at the Ball on Saturday evening

Saturday morning opportunity to go on a 2,5 hr sailing trip around lake Veere on the Utrechts Statenjacht. This Tall Ship is a reconstruction of a 1746 ‘Statenjacht’.

On Saturday we will go to the nearby town Middelburg for the afternoon program and the Mayor Schorer Ball.
Change of attire is possible in the Town Hall.

There is the possibility to travel by coach : purchase your return ticket 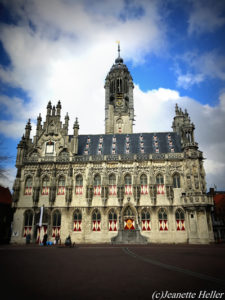 The Ball is in honour of Mayor of Middelburg Mr. Jacob Hendrik Schorer, who kept a diary about this turbulent period in Zeeland. Originally this diary was intended as an exchange of letters with Mayor Schorer’s right hand and friend Jan Stavorinus.

The evening will start with a reception in the Hall, at 7.00 pm with coffee/tea and delicious appetisers made by Marieke Soetebier. They will serve more during the evening, as well as some of the appetisers they made at Waterloo (18) 2015 for the Prince of Orange and his entire staff. For many years ‘Marieke Soetebier’ has cooked large and small historical dishes and meals, using historical recipes.

At 7.30 pm we will go upstairs to the ‘Burgerzaal’ where the Ball will start.

With Dance master and choreographer Lieven Baert and
‘Das Neue Mannheimer Orchester’ under the direction of Anders Muskens.

Change of attire is possible in the Town Hall.
There is the possibility to travel by coach : purchase your return ticket !

The Town Hall of Middelburg is late-gothic and situated at the market of Middelburg. Construction began in 1452-1520. A facade with gothic windows, red-white shutters, smaller turrets and 25 statues of Zeeland’s counts & countesses. The town hall’s interiors burnt down during the WWII bombardments. A large restorative campaign lasted till late 20th century.

After the ball a bus awaits for those who have to go back to Veere.

10 am – Memorial church service in the Little or Scottish Church The Scottish church was the first Scottish Kirk (1612) established on foreign soil, linked with the General Assembly in Edinburgh. Veere was the center of profitable wool trade between Scotland and the Low Countries from 1541.

1.30 – 3.30 pm Landings and reenactment Battle Veere
On Sunday all Regency participants can attend the reenactment “Landing and Battle” Veere1809 for free.
Just bring your Ball ticket !

On sunday there is time to watch the battle and activities around it.

The ticket for the Major Schorer ball is also the your pass for the sunday battle. Don't forget to bring your ball ticket!

Get your tickets here!

How to get to Veere?

Travel information
The nearest airport is Rotterdam at 1.5 hours distance. With Brussels, Eindhoven and Amsterdam at 2 hours traveling from Veere. At the airport you can rent a car. Or use public transport; you can buy daytickets at the airport or at any train station. Go to Middelburg by train, than take the bus to Veere. Use this website 9292.nl/en to plan your trip, you can see in the picture what this looks like:

If you travel from (south) of the UK it might be quicker to come by car,
take a ferry or the Channel tunnel.

Accommodation
To find accommodation search via booking.com or try airbnb.com. Veere is a small city, there are not many places to stay, there is more around Veere or in Middelburg which is 15 min. away by car or 20 min. by bus from the bus stop at Middelburg station.